Can you imagine getting from Athens to Leipzig in 15 minutes? Ok, now that was a very curious introduction to our latest infographic. But if you know the fundamental principles of European urban development from an investor or financing point of view, then you will of course be familiar with the Athens Charter from 1933 and, of course, the Leipzig Charter since 2007. To put it more simply: from a car-friendly city to a “fair”, “green” and “productive” city. In addition, there is digitisation as a cross-sectional function - known as a SmartCity.

Anyone following the evolution of this development should be reassured, because a new movement is finding more and more supporters across Europe: the "15-Minute City". Cities, municipalities, project developers and the bicycle faction find their pleasure in it. Because within a radius of 15 minutes by bike or walking, the essential retail infrastructure, doctors, local recreation, education, and gastronomy / culture can then ideally be found. The aim is to focus on decentralised services with a sustained high level of network infrastructure, including climate-friendly buildings. And to develop pedestrian, bicycle, and traffic-friendly routing within the city quarters.

It is obvious that this will have an impact on urban development, project developments and returns in the medium term. This focus or concentration of urban life on a few streets or square kilometres will lead to urbanisation effects such as new buildings, higher building densities, gentrification effects and ultimately higher purchase and rental prices. These are the results of that ideology.

That is why Catella Research has in the current infographic:
“The 15-Minute City - New DNA for Real Estate Investors?“
not only presented the basic elements, but also worked out the practicalities using 4 European examples. Be it the Latin Quarter in Paris, Södermalm in Stockholm, El Raval in Barcelona or Bockenheim in Frankfurt (there are of course a lot more examples) - they all have in common that this model is intuitively implemented in each location and with the effects outlined above.

But it is also clear that mixing, affordability, and investor perspective together and thus meeting all requirements seems impossible at first. It is naive to believe that these previous structures could somehow be preserved from a market point of view. The short distances between living, working, and consuming are certainly the Europe-wide mantra of the near future in the post-Covid phase. Process-wise, however, one should also look at the new values created and changing social mix within the 15-minute catchment. We would like to initiate this discussion with the new infographic. 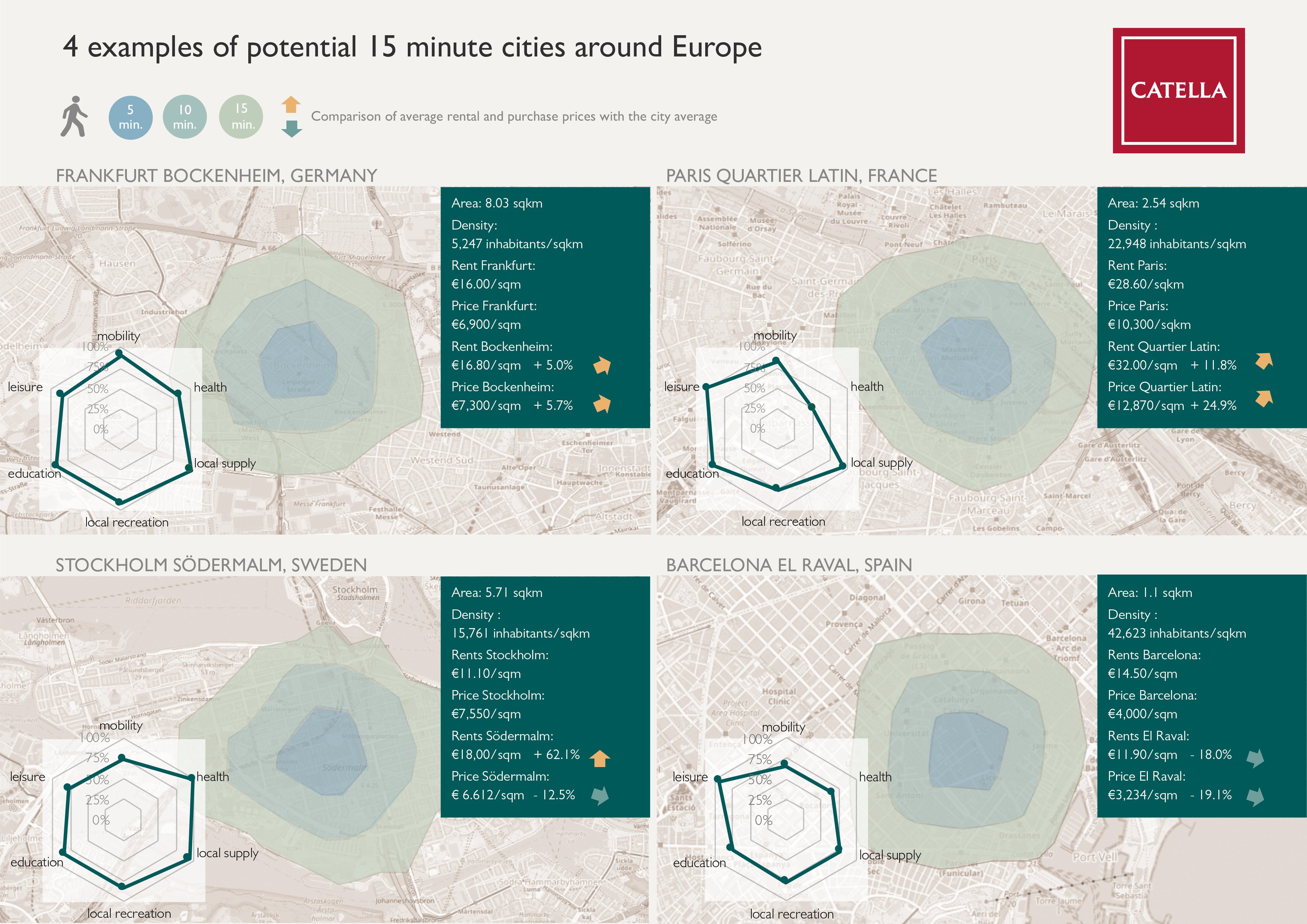