The Covid-pandemic has undoubtedly turned many preconceptions on their head – in everyday life, but also in the financial markets.

Such a belief, that many market veterans stubbornly have stuck to, is that the current rates levels must shift upwards, even if "lower for longer" has been a comfortable position during the last years; i.e. that interest rates are going up, but not just right now. The most effective illustration of this unluckly stubborn view of the interest rate development is the so called "Riksbanksigelkotten" ("Riksbank hedgehog"), where the bank on each and every occasion and economic situation estimates a rising interest rate path. 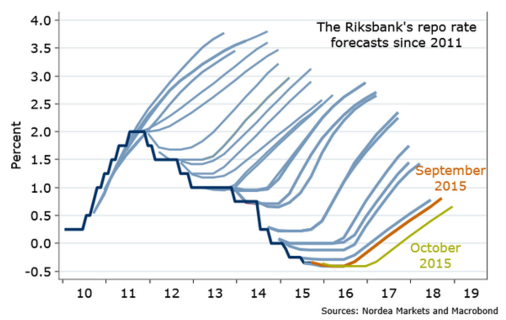 For many of us Covid displaced this view. The fiscal stimulus packages that have been decided in this crisis are of such a magnitude that the global debt burden has been driven up to historical record levels at an accelerating pace. The period after the financial crisis in 2008 should have been characterised by lower debt levels, but the result was the opposite. The Covid-crisis has opened the floodgates fully and they will be difficult if not impossible to shut again. Maastricht criteria and other red lines have been crossed since long and the condition for the global debt burden to be sustainable is zero interest rates forever.

This enormous deficit financing would not have been possible without support from central banks such as promises of unchanged policy rates (after having lowered them) and massive asset purchases. We are used to such policy leading to asset inflation, but the real inflation in goods and services does not tend to follow a deep recession where the production gap, difference between actual and potential GDP, widens drastically.

However, we find ourselves, after a brief deflationary impulse, in a renewed period of uncertainty regarding rising inflation and interest rates. How is this possible? The corona-crisis management has led to several consequences that stand out compared to other crises unfolding – many new records have been set! The US monetary supply has never in modern time grown so fast. The budget deficits have hit records, which among other things can be seen in the unusual relationship between the households' disposable income hitting record high as unemployment shot through the roof. Both the real and the financial economy are quite simply swamped with cash.

A dividing line for the market was the Senate election in Georgia at the start of the year, that handed control over the Senate to the Democrats, which is seen as a green light for further deficit financed investments in the coming years. In addition, we now stand before a wall of green investments globally that have bigger potential to drive commodity and labour force inflation than the last decades' investments in IT and digitalisation.

Are rising inflation and interest rates a threat to the stock market? In relation to inflation, a high and at the same time rising level of inflation is rarely good, but equities tend to provide good inflation protection together with commodities and other real assets. In relation to rising interest rates' impact on equities it is usually regarded as positive as long as it is at a moderate pace from low levels and that the rise in interest rates is driven by a stronger growth outlook. So far, we find ourselves in this benign situation and the stock market development is more about what happens beneath the surface in the different segments of the market.

Rising real interest rates as a discount factor, in our view, provide a welcome equalisation between expensive growth and momentum shares on the one hand and cheaper value shares on the other. Cyclical shares, especially commodity companies, benefit in the current development at the expense of defensive shares. Some of the Swedish banks that we regard are in a good earnings trend and have too low valuation given their degree of overcapitalisation, benefit from rising long term interest rates even if much of the positive effect came from the elimination of negative policy rates in Sweden 2019.

A part of the market, that we deem particularly interesting, given the forecast of "zero rates forever", is what we call serial acquirers. The most famous serial acquires are potentially trade companies such as Indutrade, Lifco and Lagercrantz. But the trend is clear and we see more companies in installation- and service, manufacturing, real estate, game development and software that profit from the advantages of "multiple arbitrage", low financing costs and functioning acquisition and control models to generate high growth and high return on equity. For the serial acquirers we don't see today's interest rate movements as an existential threat for the shares that command reasonable valuations.

The acquisition calculations are less sensitive to the financing cost and are more dependent on the initial acquisition multiple and here a normalisation of the interest rate and credit markets can have a cooling and stabilising effect.

Altogether we think that a normalisation of the fixed income market is a welcome development and evens out some imbalances in the stock market. The risk of a vicious spiral with quickly rising real interest rates exists given the overheated demand situation we seem to be heading into; but around the corner cooling factors await such as restrictive fiscal policy, restocked warehouses, and potential low potential growth.

Investments in funds are subject to risk. Past performance is no guarantee of future returns. The money invested in a fund can increase and decrease in value and there is no guarantee that you will get back the full amount invested. Read more