At the 500-million Euro project „Grand Central Düsseldorf" an important milestone has been reached. At its latest meeting the city council of Düsseldorf decided by an overwhelming majority the land-use plan for the urban district development in central situation of the Rhine metropolis.

The project „Grand Central" makes an important step to the next realisation phase. After the committee for housing and modernisation, the district representative office and the committee for planning and urban development (APS) had already agreed to the project, now the city council has also determined the project. With it the legal planning basis for the later planning permission took place.

„The positive wailwind from politics, administration and public motivates us to realise this and maybe other projects in the city of Düsseldorf", says to Klaus Franken, CEO of the Catella Project Management.

Catella Project Management has developed a living urband district together with involved authorities and planners which will turn the former mail distribution center at the main station into an urban quarter with three high-rise living buildings and over 1000 flats. Beside many living spaces there will also appear other usages like hotel, gastronomy, trade, fitness, various service offerings and room for recreation. "We are proud of the alreade reached goals and we want to praise the always targeted behaviour of all participants from administration and politics. Several reports, statements and planning documents have been examined and adjusted over the last two years. Now we have a foundation according to planning law for a urban district and an amazing, long-term-oriented investment product" says Klaus Franken and adds "Now it's time for the constructional implementation and eventually the exciting operational phase, when plans become reality. The long term investing strategy of our investors requires a future oriented alignment, which considers any demographic and technical evolution already now".

For the comissioning of the project Catella Project Management has already developed a district management concept that includes a smartphone application, a sharing concept for cars and bycicles and solutions for mail and packages or aswell rental strategies for commercial spaces.

„We are starting the destruction of the former building in May. We want to create a mixture in the structure of the residents and we want to create fitting living space for all ages and living situations. We are working on innovative plans for urban projects and districts for years. Like this we want to enable a comfortable living situation for citys and residents. We are including this in Grand Central aswell as in all district developments such as City Ost in Mönchengladbach" adds Klaus Franken.

During the time until construction, Catella Project Management made the area aviable for the public. Like this, over 60.000 people were able to visit the area. Over 100 events make the former mail distribution center a famous location which shows a living character.

With the project „Grand Central" 1.000 rental units and condominiums for people in all life phases are being developed at the main station of Düsseldorf. Completed by a lot of gastronomy, retail, hotel, fitness and day-care facilities, perfect qualifications are met for an innovative and sustainable district development. Things

of daily needs and any kind of local amenities can be done on short ways or directly in Grand Central without a problem. The district management offers residents and neighbors a helpful service which makes life easier and more pleasant. In direct neighbourhood to Tanzhaus NRW, Capitol-theatre and citizens' park a multifaceted proposition is offered. The spacious and generously greened patios will provide a high residence quality. This is also true for the planned district centre, which invites to relax and meet neighbours and friends. 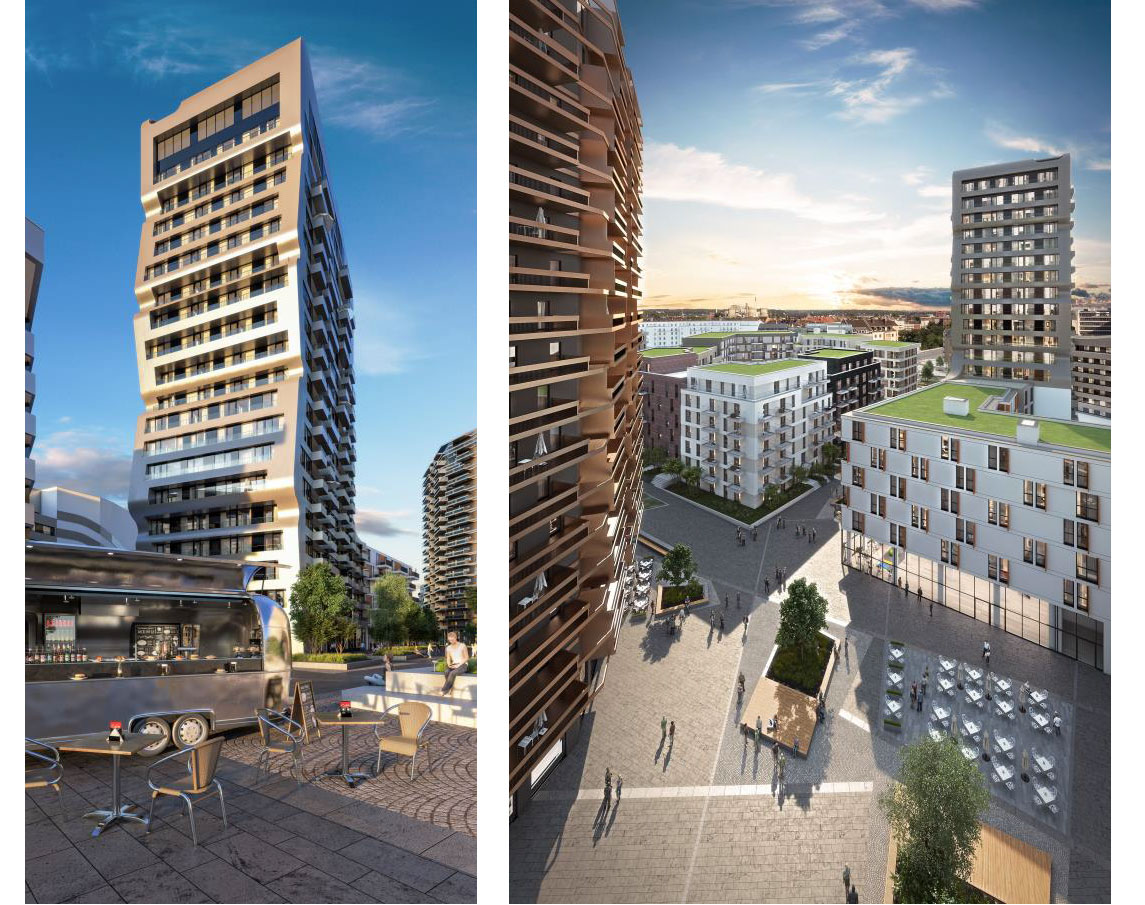