Frankfurt, 27.06.2019 – The former office district of Niederrad becomes a hot spot for working and living with short distances in the middle of the city. The Living Lyon project was completed on schedule by Catella yesterday. The tenants of the 2- to 3-room apartments can move in on 1 July as promised. The project is almost fully let before completion; only a handful of apartments are still available. 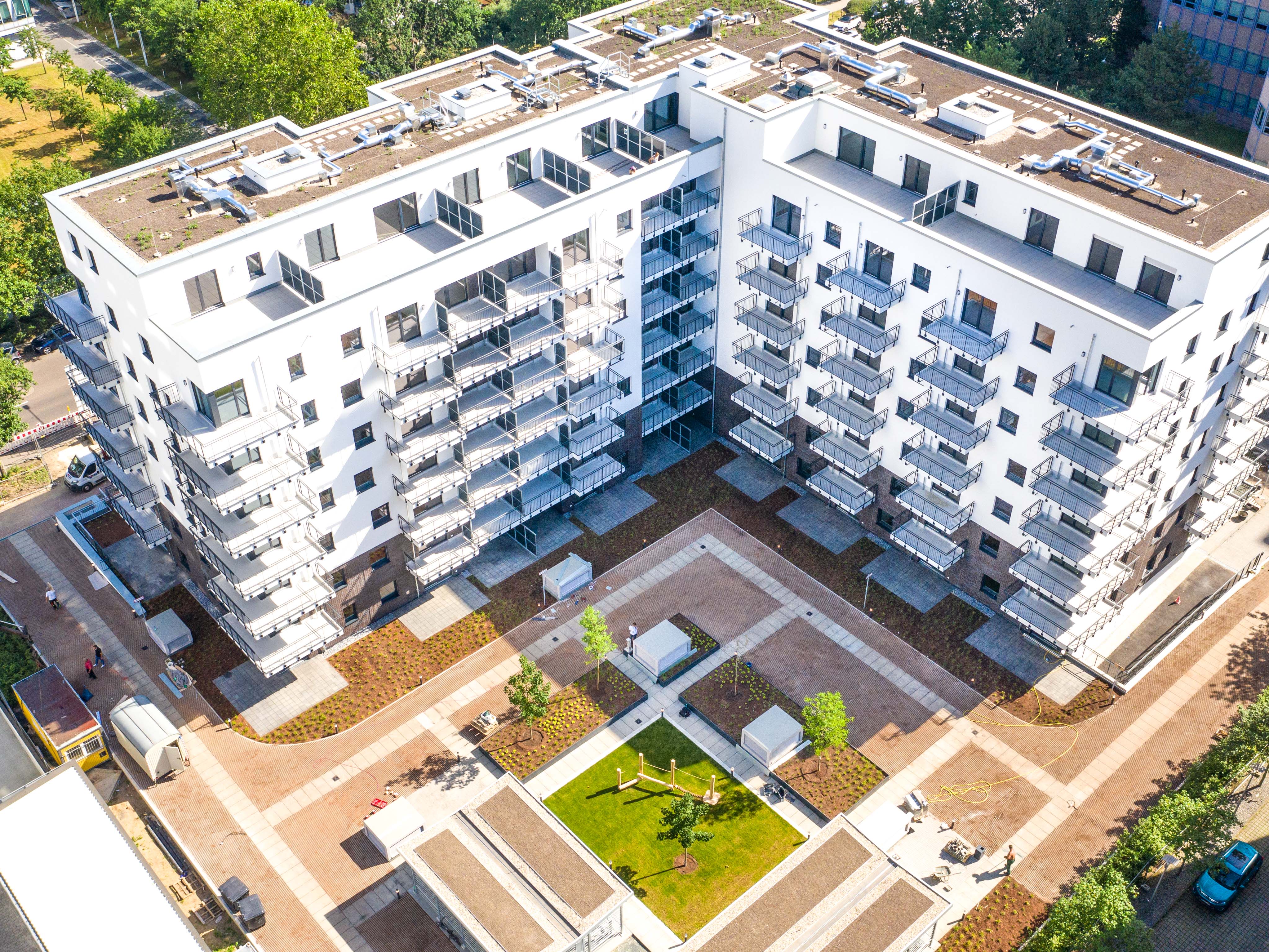 Catella Project Management realized the project and had it erected by Hochtief as general contractor. The 123 new apartments at the corner of Rhone and Lyoner Strasse complement the residential portfolio of Industria Wohnen in Lyoner Quartier, which comprises around 250 units. Industria had already acquired Lyoner Strasse 19 years ago through Catella.

In the near future, around 10,000 people will live in the quarter, which has since been renamed the Lyoner Quartier. Klaus Franken, CEO of Catella Project Management, has been a member of the SINN (Standortinitiative Neues Niederrad) board of directors for many years. With the Living Lyon project, Catella is making its own contribution to relieving the tense housing market in Frankfurt. The former office town of Niederrad has become a mixed neighbourhood in which working and living with a high quality of life are moving ever closer together.

Klaus Franken: "Living Lyon has been completed on time. After almost one and a half years of construction, including the demolition of the previous massive office development, we have remained absolutely on schedule despite the scarcity of capacity. The record-breaking, fast letting shows how great the demand is for apartments in the Lyon district. Word has got around that the Stadtwald, Main, City and Airport are all just a stone's throw away and that the once modest image has completely changed."

Catella has designed the rental apartments according to the concept "Living for all" for different target groups, for singles, couples and families of all ages. The effectively designed floor plans of the 2- to 3-room apartments with almost 60 m² to over 80 m² offer a lot of space on seven floors for a high quality of life and create a high utility value for the residents. The ground floor apartments all have their own gardens. With roof terraces, the penthouse apartments offer an attractive view of the unmistakable skyline of Frankfurt.

The residential complex is divided into various stairwells so that small neighbourhood communities can form. The quality is high with a fitted kitchen, parquet flooring, underfloor heating, large storage rooms with washing machine connection in the apartment and a private underground car park with e-charging stations, which can be reached by elevator directly from the apartment. A roofed, ground level bicycle garage as well as play areas and green areas show the possibilities of modern living. Living Lyon is open to new mobility and logistics concepts. The location between the city centre and the city forest - just a few minutes' walk from the banks of the Main - is perfect.

Klaus Franken looks back: "With this project, Catella wanted to realise modern rental apartments as "living for all" with the high standards of the Swedish company. It was important for us not only to build commuter apartments and micro-apartments, but also to locate permanent residents and families in the former office district with classic apartments, which would enrich the quarter. The mix of tenants that has been realised, with long-established Frankfurt residents, newcomers from the immediate neighbourhood, new arrivals in Rhine-Main or even in Germany, confirms the success of the concept".

Living Lyon is part of the district development Lyoner Quartier. Catella complements the existing residential property at Lyoner Strasse 19 (the first property in the neighbourhood to be converted from office to living space in 2010) with the new building at the corner of Rhone and Lyoner Strasse, thus creating space for around 500 residents in the now mixed-use neighbourhood. In total, the residential ensemble comprises approx. 16,000 m² of living space and offers a mix of 1 to 3-room apartments. G + N Consult, Hochtief Infrastructure GmbH, BST Becker Sanierungstechnik GmbH, jens + mai Architekten, RWP Rechtsanwälte, Steuerberatung EGSZ, Doppelpunkt Kommunikation and NAI apollo living participated in the realisation.